I’d like to preface this piece by stating that I think Édgar Ramírez is one of the greatest actors working today. He is an actor with so many layers and skills that it constantly frustrates me that the projects he gets offered never take advantage of his talent (Joy, Zero Dark Thirty). (If you are unfamiliar with Ramírez’s genius, stop reading, go to Netflix and watch Carlos now! The man can act in 5 languages!!!) There was a time when Robert De Niro was my favorite working actor. Now, that time seems long ago as he continues to play a parody of a parody of his old characters, but I went into Hands of Stone thinking that maybe this combination of Ramírez, De Niro, and the life story of enigmatic boxer Roberto Durán could be the breakout/ comeback film I had hoped it would be when I first heard about it two years ago.

Unfortunately, Hands of Stone is not that film. There are many things that don’t work in the film, but the most egregious issue is that Durán as played by the always luminous Ramírez, is not the center of the film. That space is taken up by the character Ray Arcel, Durán’s American trainer, played by De Niro. Once again, even though there is a Latino star and a Latino director behind this film, the story revolves around the white character. This is Durán’s story through Arcel’s eyes and because it’s clear that Arcel never really understood Durán nor his motivations, the film doesn’t understand Durán either. Ramírez breathes life into this walking contradiction of a man, but the filmmaker seems uninterested in understanding Durán himself and instead relies on Arcel to provide oppressive voice over and in a painful press conference scene, to try to explain Durán’s motivation behind his most well-known moment. It’s not a spoiler to say that especially in the US, Roberto Durán is best known for quitting in the middle of a fight against “Sugar” Ray Leonard, and uttering the now famous words “No mas.” Durán, an icon in Panama, deserves a better film, and Édgar Ramírez deserves stronger material. 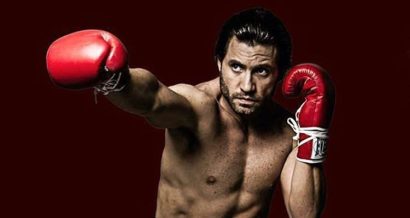 Now, I hear over and over that it is difficult to finance a story unless there is a white guy at the center. (See Matt Damon wandering into 10th century China in the The Great Wall). Jonathan Jakubowicz, the filmmaker behind Hands of Stone even wrote a piece recently about the need for more Latino movie stars. I just wish Jakubowicz had made a better film and trusted that his star could be the true lead rather than centralizing the white character and making the story revolve around Arcel’s interpretation of Durán rather than Durán himself.  I still have hope though. I am waiting for some talented writer of any background to create a star vehicle for Édgar Ramírez where he actually gets to be the lead. This guy is a knockout.